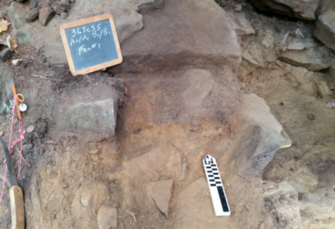 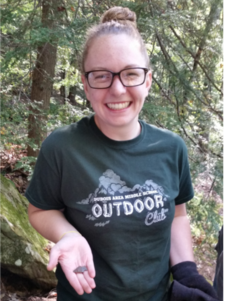 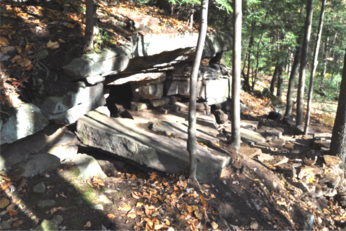 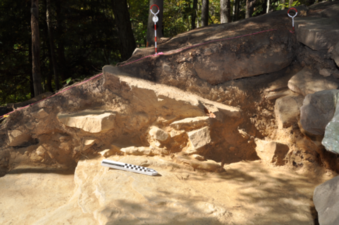 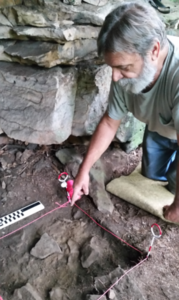 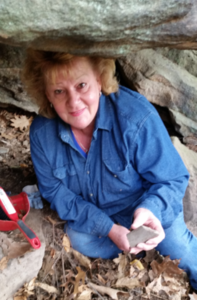 I first visited the rockshelters now contained within the Scripture Rocks Heritage Park during a survey of numerous potential rock enclosures in the Brookville area known by Ray Fitzgerald sometime in the fall of 1979.  We recorded the site with the Carnegie Museum of Natural History Archaeological Site Survey on 2/16/79 and it was processed there by Dr. Stanley Lantz. The site form is pretty unflattering by today’s standards, but included a note that fire burnt stone, flint chips and      numerous small bone fragments were eroding out of the surface.  From then until last year, we always knew the site was there, but other more relevant fieldwork always seemed more than these out of the way rockshelters.

While we were working on the park, I noted the shelters to others in our chapter and discussed if we should excavate the site or keep it intact.  We just didn’t know what to expect from an anticipated number of people or how anxious they would be to clamber over every rock in the park.  That answer was soon answered with over 9,000 people there in the first 120 days.  The shelters were being intruded into daily and it was only a matter  of time until someone would begin digging for treasure or get hurt trying to climb into the various small openings.

Formal excavations by chapter 29 commenced on Sept. 17 and continued 2 to 4 days a week through November. This was a first experience for many members and was a great opportunity to see first hand how this shelter developed geologically through time, and although small had been utilized by man and beast for thousands of years.

We began moving dirt in the South east quad just under the drip line intending to determine if there was any sign of stratification and gradually work both into and back out of the shelter.  Within 15 minutes of starting to work, Denny Scholar discovered the first stone tool which appears to be a large ovate drill.

Interestingly we discovered the site varied in depth depending on the amount of soils that could and did accumulate from ongoing roof falls and movements of the outcrop through time.  Soil depths ranged from 20 cm to over a meter at the shelter face.  There were intact occupations under some of the roof falls and the small cave like cavities held surprises.  Only one distinct hearth     feature was located and it appears that others were located on the surface of rocks or atop the ground and left only scattered ash and burnt stone.   No artifacts were recovered from within a datable context. Joy Rossey volunteered to work under a small adjacent crawl space and lying on the surface was a broken tube pipe preform made of Jefferson County Fireclay.   These pipes are rare and this is a great example of an Early Woodland period ca 500 BC artifact that was broken before being drilled and surface polished.  Interesting to note that the large drill Denny found nearby on the first day of the site might have been the tool intended to have been used to drill this object.

This shelter is now complete with almost all accessible soil removed and only a small profile kept intact near a large roof fall in the West end of the shelter.  The roof falls have been moved or removed to create access and an accessible pathway to the site so it can be used as an interpretative location to tell the story of the native American occupations at the park.  We would eventually like to install at least 2 new interpretative panels, with one on the main trail to discuss rockshelters and their use,  and the others at the shelters to discuss the excavation and findings.

Below are the diagnostic stone tools recovered.  Other artifacts include a few prehistoric ceramic sherds, a number of chert flakes from tool manufacturing, and a lot of large and small mammal bone that still need evaluated as to species.  Some of this bone appears to have been split and burned during cooking.  A preliminary report was published in the 2017 Jeffersonian Journal through the Jefferson County Historical Society and a formal report will be forthcoming.